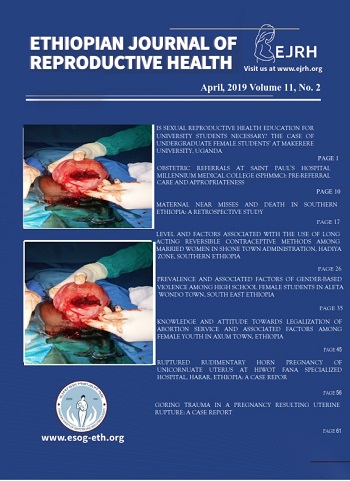 ABSTRACT
BACKGROUND: Globally, maternal deaths declined by 44 percent between 1990 and 2015, however it remains unacceptably high in sub-Saharan Africa. In Ethiopia, around 13, 000 of women and 84,437 neonates died annually in 2013. Hence, this study assessed the magnitude of maternal near misses and death in southern Ethiopia. METHODS: An institution based retrospective cross-sectional study design was conducted from October, 1 to 30, 2016. All mothers registered with pregnancy related complication during August 2014 to September 2016 were included in the study. World health organization maternal near misses’ tool were used to collect the data. SPSS version 20.0 was used to calculate various indicators. RESULT: In this study, 15,059 cases attended obstetric care service during the study period. Among total admission 591 were identified with severe maternal outcomes. The main causes for admission were severe preeclampsia (51.8%) followed by postpartum hemorrhage (24.9%). Out of the total severe maternal outcomes 90 (15.2%) end up with maternal death while the rest (84.8%) were near-misses. One hundred seventy (28.8%) of newborn died during delivery. In the current study, the total maternal near misses and maternal mortality ratio was 33.3 per 1000 live birth and 59.7 per 100,000 live births respectively. In addition, sever maternal outcome and total near-misses ratio to maternal death were 39.2 per 1000 live birth and 5.57:1 respectively. CONCLUSION AND RECOMMENDATIONS: A significant percentage of women were near misses and suffered from life threatening conditions. It is highly advisable to use an assessment guide protocol and documentation.
KEYWORDS: Ethiopia, Maternal Near Misses
(Ethiopian Journal of Reproductive Health; 2019; 11;2:17-25)