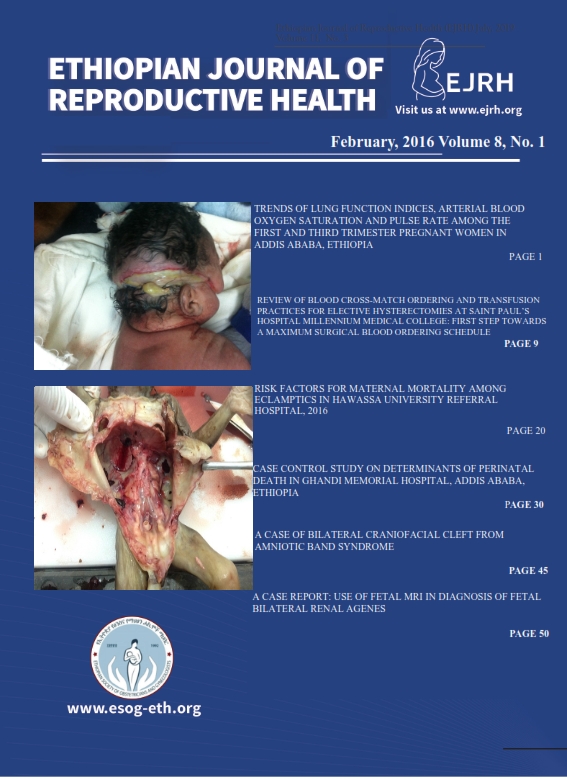 View or Upload This Article

Amniotic band syndrome [ABS] or amniotic disruption complex is defined as a destructive process of fetal damage
in a random non symmetrical distribution, which is not attributable to aberrations in normal embryologic
development processes .The mechanism has been considered to be initiated in rupture of the amnion, with the
fetus then coming into contact with the chorionic surface of the amniotic membrane ,to which it adheres or
becomes entwined by fibrous strands .As the fetus grows ,The tethered regions are progressively distorted, leading
to constrictions, amputations ,Slash defects, and body wall or cranial defects .The severity varies from a single
constrictive ring of a digit to lethal thoraco abdominal eviscerations or craniofacial distruction.ABS is a rare
disorder in which bands of mesoderm that emanate from the chorionic side of the amnion and insert on the
fetal body can lead to a wide variety of disfiguring and disabling malformations[1,2]
.
ABS results in the amputation of the fingers or limbs, associated with a wide spectrum of congenital anomalies
usually involving the trunk and craniofacial regions including the skull. AbBS is in general sporadic and the incidence
is approximately 1 in 15,000 live birth. Characterized by a destructive fetal process that is initiated by rupture
of the amnion. Proposed as a sequel of intrauterine rupture of the amnion resulting in oligohydramnios
and passage of fetus to chorionic cavity .The fetus subsequently becomes adherent to intertwined in, and tethered
by fibrous mesodermic bands .As the fetus grows, its anatomy is distorted .This may lead to cranial or body
wall defects or and although been reports of associated malformations of internal structures. [3, 4]
ABS that involves craniofacial region may present as cleft lip or palate , oblique or transverse facial cleft .These
craniofacial anomalies in ABS are typically often bizarre and frequently non-embryological .The exact cause of
ABS is still unknown .This lack of direct evidence has led to the proposal of two main etiological theories. The
extrinsic and the intrinsic 4. The extrinsic theory states that the band of ruptured amnion causes an extrinsic
compression which then results in constriction rings and other deformities of the developing fetus, while the
intrinsic theory holds that germ cell deficiencies result in the malformation of the affected parts [4]. Treatment is
usually carried out after birth when plastic and reconstructive surgery is considered to treat the resulting deformities.
[4, 5]
(Ethiopian Journal of Reproductive Health 2016; 8:50-55)