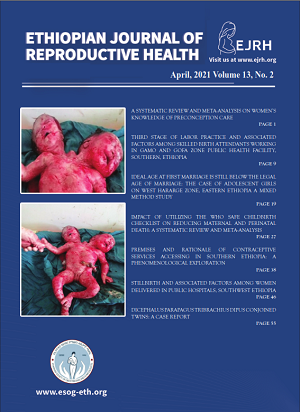 BACKGROUND: Stillbirth have decreased substantially worldwide in the past 40 years. Yet there is still a large gap between the developing and developed countries. Data on prevalence and main risk factors for stillbirth were limited in developing countries including Ethiopia. Identifying the prevalence and risk factors of stillbirth is important for planning maternal and child health care services.

OBJECTIVE: To assess the magnitude and associated factors of stillbirth among women delivered at public hospitals in Southwest Ethiopia February 01 to March 30, 2018.

METHODS: A cross-sectional study was conducted on 1980 delivering women’s from randomly selected hospitals from February 01 to March 30, 2018. All women who gave birth at public hospitals of Bench-Maji, Kaffa and Sheka Zones during study period were included. Data was collected by pretested questionnaire by face to face interview and entered to Epidata version 3.0 and exported to SPSS version 20 for analysis. Logistic regression analysis was carried out to identify independently associate factors at CI of 95% and significance level of P-value<0.05.