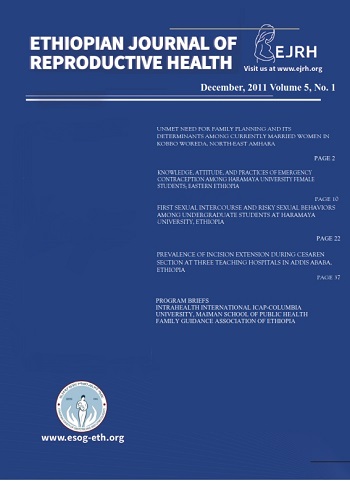 Back ground: First sexual intercourse is a milestone that varies considerably in its timing and its timing and represents an important developmental state. However, it has negative aspects such as unwanted pregnancy, sexually transmitted diseases and infection with HIV. Most adolescents do not use any form of contraception when entering into sexual intercourse for the first time.

Methodology: This is an institution based cross-sectional study conducted from January to February 2010 among undergraduate students at Haramaya University. Quantitative data were collected from 846 randomly selected students.

Results: The majority (536,69.8%) of the students were male. From 843 participants 304(39.6%) ever had sex. The man (SD) age of first sex was 17.8(2.5) years. The majority of the respondents (138,45%) decided to have first sex because of falling in love, followed by curiosity (47,15.5%) of respondents. Out of the sexually active, 82(27%) had their first sexual intercourse with a casual partner. Less than half (42.8%) reported having used any contraceptive method during first sexual intercourse. Peer pressure, having friends who had sex, being male respondents, and discussion of sex related issues with boy or girl friend were among the factors predicting sexual initiation.

Conclusion: A sizable proportion of the participants had had initiated sexual intercourse. Peer pressure is the main reason mentioned for sexual initiation and risky sexual behaviors. Programs and intervention should seek to help individuals postpone their first sexual experience until they are ready for responsible decision making.