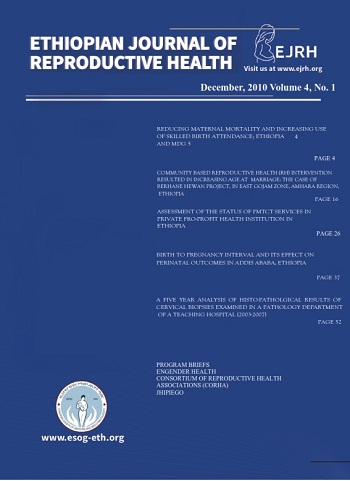 Background: Among adolescent girls aged 10-19 years who are living in West Gojam zone, Amhara region, poor school attendance, social isolation, early marriage and poor utilization of reproductive health (RH) services were observed before the launching of the Berhane Hewan project. To mitigate these problems, Behane Hewan was initiated as a multi-component intervention. After two years of implementation of the project, it was shown that marriage was delayed, school attendance and family planning use increased. However, it was difficult to ascertain which components exerted relatively greater influence in bringing about these behavior changes.

Objectives: To explore the contribution of different reproductive health (RH) and other interventions in delaying early marriage, increasing school attendance and FP utilization.

Methods: A cross-sectional study design was conducted using both qualitative and quantitative methods in August and December 2009, respectively. The qualitative data were collected using nine in-depth interviews while the quantitative data was collected from 150 respondents among fathers; mothers and husbands of girls who were participants of the Berhane Hewan project.

Results: The husband’s group was generally younger than parent respondents who ranged from 30-60 years of age.

The vast majority of male respondents were farmers, while females were housewives. The majority of respondents mentioned provision of school supplies as influential in keeping girls in school (88% of fathers, 92% of mothers and 60% of husbands). Among the intervention components that promoted delayed marriage, Community Conversations was mentioned most often by respondents (76% fathers, 66% mothers and 84% husbands). Group mobilization of girls was mentioned by 68% of fathers, 66% of mothers and 78% of husbands. Community conversation (85% fathers, 74% mothers and 76% husbands), group meetings by mentors (56% fathers, 52% mothers and 64% husbands), and house-to-house visits by mentors (48% fathers, 42% mothers and 44% husbands) were mentioned first, second and third, respectively as intervention components that brought about improvements in FP knowledge and practice among Berhane Hewan program participants. In-depth interviews resulted in giving community conversation, social mobilization and school incentives the same priority sequence.

Conclusion: Community conversation, social mobilization and school material support could be used as major intervention components to replicate the Berhane Hewan program. For those who want to delay marriage and improve RH/FP utilization among adolescent girls, the above interventions could be enough to bring about the desired improvements among adolescents. However, in order to avail opportunities for girls’ education apart from the interventions detailed above, school material support is required as one of the interventions to achieve better results. Nevertheless, these preliminary findings have to be strengthened through a carefully monitored qualitative and quantitative study by using major intervention components/models detailed above to explore the critical components that influenced behavior change that would allow Programmers and policymakers to upscale Berhane Hewan in a cost-effective and sustainable manner.