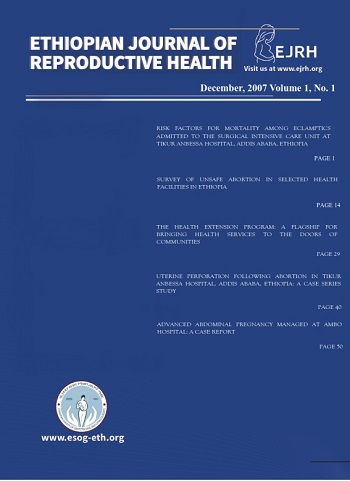 Abstract
In order to fill the gap in evidence based information, and help in programming for the reduction of
maternal deaths due to unsafe abortion, a nationwide hospital based survey in 9 of the 11
administrative regions of Ethiopia was conducted from June to December 2000.
A total of 1075 women presenting with abortion to the 15 hospitals during the study period were
consecutively enrolled . About 58 percent of the cases were in the age range of 20-29 years, 26.5
percent were illiterate, and 27.5 percent were with secondary education. Three-fourth of patients
had spontaneous abortion and one fourth (25.6 percent) of them had induced abortion. The
majority of women (87 percent) were aware of contraceptive methods, but only about half of them
ever used a family planning method. Of those pregnancies that ended in abortion 60 percent were
unplanned and 50 percent were unwanted. Method non-use was responsible for 78 percent of
pregnancies that occurred. Among those with induced abortion, the most common reason for
termination of pregnancy was contraceptive need. Rape accounted only for 3 percent of all
pregnancies that ended in abortion (i.e. 2.5 percent of all reasons for termination of pregnancies).
Fifty eight percent of women who induced abortion terminated the current pregnancy either by
seeking the help of untrained personnel or by themselves with no assistance. The most frequent
reason for hospital visit was vaginal bleeding and abdominal pain. Evacuation and curettage (E &
C) was the commonest method (83.6 percent) of evacuating the contents of the uterus. The major
categories of complications identified were infection (28 percent), genital tract injuries (12
percent), foreign bodies in the genital tract (1.6 percent) and organ failure (13.1 percent). There
were 13 deaths, which made an overall procedure related deaths of 1,209 per 100,000 abortions.
Using a modified Delphi technique, and taking the six months study period, it was found out that the
total cost to treat incomplete abortion by health facilities under this survey was Birr 332,259.9. In
conclusion, there is a need for a strong family planning program for the country, to prevent
unwanted and unplanned pregnancies. There is a also an urgent need for improvement of providers
knowledge and skills, provision of safe abortion services, and liberalization of the abortion law.
(Ethiop. J. Reproductive Health May 2007, 1(1), 28-43)